For all our international customers, click here to see our international shipping policy page for the latest updates on shipping. we appreciate all your support and wish everyone a happy 2023!
By BirdJuly 31, 20145 comments

Helping A Bird To Settle At Night 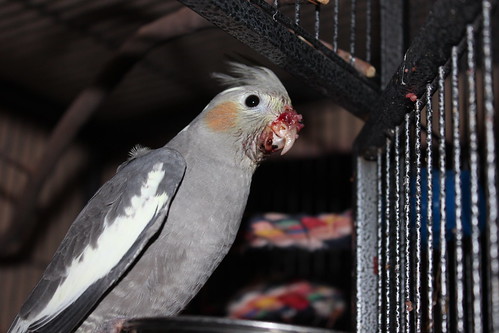 Cockatiels are notoriously easy to disturb at night. How’s this for a messy beak? This one likes pomegranate!

Normally if I hear a bird crashing around in its cage after falling off a perch at night, I’m going to think of a few possible causes:

Well sometimes things just happen and something will disturb your birds at night. Personally, I minimize that risk by covering my birds’ aviaries at night. I’ve also confiscated my kitten’s ping-pong ball. (Problem kitten behavior: Let’s throw ping-pong balls at the bird room door at 2am.)

In terms of night frights, I don’t actually have any birds in my flock that are prone to them. 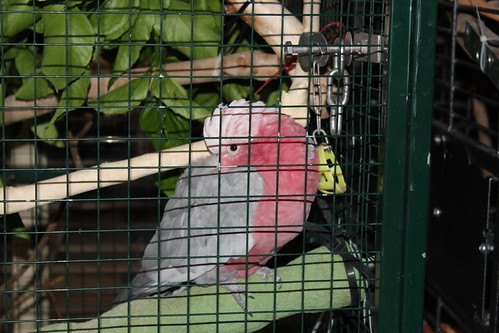 Nemo, one of my Galahs/Rosebreasted Cockatoos likes to sleep on this perch for a few hours every afternoon.

The third option – something could be medically wrong. I’m always in favor of a vet check when something is not quite right with your bird. An example in my flock was when Fid (my macaw) had issues with settling at night when he was suffering from psittacosis. In his case I found a heat lamp and the introduction of a sleeping platform helped.

Lately, I have been dealing with a fourth cause. I have welcomed a new bird into my flock. The new bird is understandably jumpy and on edge in a strange environment. There are some general things to keep in mind when you first bring a new bird home. My recent experience however, has highlighted that the complete darkness that I ensure my birds have at night, can be more than a little dangerous for a jumpy new bird. 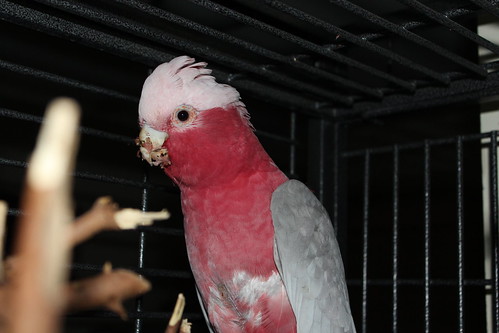 Charlie. The newest member of my flock. Likes his food…

Personally, I don’t like using night-lights. They can be fantastic, but I’ve found that if I use a night light with my flock – my birds simply will not shutup. One will ask “Where are the peanuts?” then another will start quacking the alphabet song and it goes on from there. They all join in and are more than happy to sing and talk to each other all night. A night-light might prevent my flock from getting spooked and flying into something in the dark, but it also leaves me dealing with tired and grumpy birds. I must admit, after listening to the alphabet being quacked full volume at 2am, I don’t become particularly friendly myself. 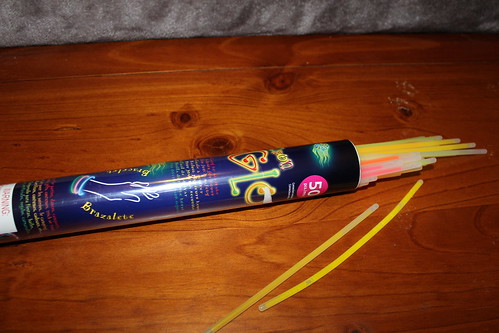 Glow sticks – nice and cheap from a junk store.

I’ve found a way around this. I’ve started using glow sticks. What are they? Thin plastic tubes, that you bend, something inside snaps and the next thing you know it’s fluorescent in colour and it glows in the dark. (Not a very technical description I know.) I bought mine at a $2 junk store. They came with connectors that allow you to make bracelets out of them. The little kid in me just wants to snap them all and make them all glow at the same time. They’re fun to play with and I suspect that’s what they’re really made for. 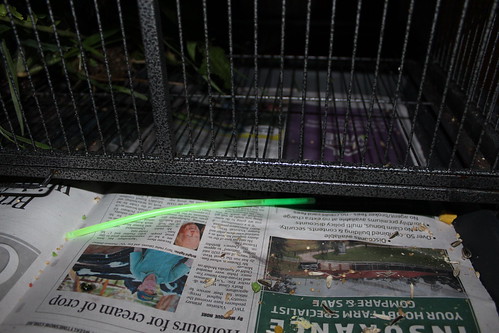 Be careful to place them out of reach of your bird. I find the tray at the bottom of a cage or an aviary to work well.

They’re not something that I would put within reach of your bird. They contain glass and the chemicals are likely to be toxic. It doesn’t take the average parrot much effort at all to bite through something like this – so don’t take that risk. That said, I find they work well if you set them off and drop them in the tray at the bottom of your bird’s cage. In other words, put it under the grill safely out of reach of your bird.  (Make sure your bird’s cage is a design where this works.)

I cover my birds at night, so this means that the light emitted from the glow stick is only visible to the bird whose cage it is placed in. The glow stick emits a gentle glow that slowly fades throughout the night. I find it gives off just enough light to help the bird see around it if it is feeling scared. This means if it does spook and start to flap around it is less likely to hit items in the cage. It also means that the bird is less likely to spook in the first place because they can see well enough to know that swinging toy in the corner is just a toy and not a predator. 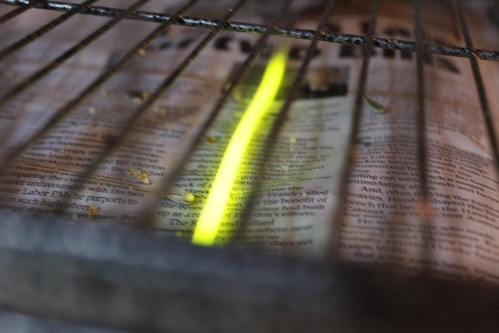 You have no idea how hard it is to photograph something to show the strength of its glow at night, while still showing enough light around it in order to tell what it is…

So that’s my tip for helping a bird settle at night in a new environment. On that note, I’d like to introduce Charlie – the newest member of my flock. 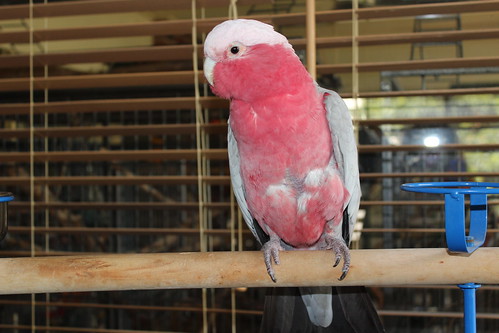 Charlie the galah. As you can see, he has plucking issues.

Charlie’s previous owner had asked me sometime ago if I would take Charlie if something ever happened to her. Considering how long parrots can live, it seems to be the sort of arrangement any responsible owner would plan for. The reason she asked me was because I’m already caring for an elderly galah. There is something to be said for keeping birds of the same species who are roughly the same age together. There aren’t that many really old galahs around. My galah, Cocky Boy turned 65 this year. Charlie is meant to turn 55 years old later this year.

So Charlie’s previous owner has had some issues that have led her to re-home him now. I hadn’t really planned on adding to my flock but I have had Charlie stay here before while his owner was away – so I know he fits. (He also fits in the filing box I keep my tax receipts – he’s an awesome shredder.) 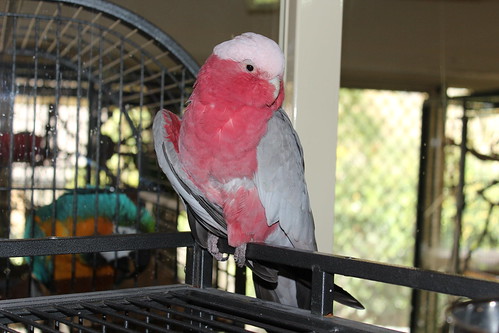 He has a few quirks that I’m wondering about? This is the position he likes to sleep in or perch. I’m wondering if there is a little arthritis starting in that wing joint? It’s not a normal behaviour so I’m working on this with my avian vet.

He’s jumpier than any of my other birds and that’s not particularly surprising because he hasn’t had a great history. His previous owner was fine, but he came to her from a rescue and as we all know rescue birds can have some issues that can mean it takes a little longer to work on trust. So the little things like using a glow stick at night seem to be making a huge difference to helping him settle in.

You’d think going to the effort of making sure he’s comfortable at night would help with building trust. Charlie however, doesn’t seem so grateful about my thoughtfulness. He’s made his preferences clear. He’s madly in love with my mother. Meanwhile I’m in trouble with her for saying that it must mean that she’s old… After all it’s the two elderly birds that have chosen her as their favourite – it’s a logical reason. Yeah – I’m definitely in trouble for highlighting that. 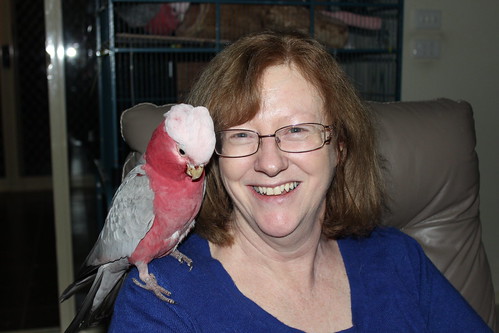 It’s love.  Charlie showing off for my mum. He glues himself to her shoulder whenever he can.

That is a great idea glow Sticks l have a dim light for my birds have lost a few from fright mice we get mice plague every now and then . My galah has picked all its back he’s inside with others it’s since my husband passed away stress we call it rescue remidie here for human anxiety stress vet told me to put 2 drops in drinking water hes is happy now but still picks he’s back and just above feet.

It’s so strange how different birds can be. I am almost bird phobic but an animal lover in general and rescued a “problem bird” from a pet store who had been bought and returned repeatedly and was obviously—even to me—in trouble. I meant to buy him and find him a good home with a knowledgable and loving person. You probably know the end of that story: moma’s baby. But I have a health issue that results in anxiety at night, and to distract myself I listen to audio books as I fall asleep. It was months before I heard birds needed dark and quiet—and don’t really believe it since I’m a country girl and know nature is neither dark not quiet. In any case, if I turn out the light without starting the CD, my guy will never settle down. After about 3 minutes he starts chanting book-Book-BOOK-NOW!!! On goes the book and out goes the bird,

Thank you for your advice. But the prablome with my african parrot is almost of the time ge is weakup.

I got the idea of not putting the glow sticks out reach very quickly, I think you did well in explaining it. Another Idea might be a clear plastic container with a screw on lid, just outside the cage or where ever is a good idea to you. (I have a small green cheek I don’t have to worry about him trying to unscrew lids on jars.) Or tape the glow stick to the bottom of the cage just to make sure it’s out of reach. I think it’s a very good Idea Mel and thanks for sharing it. I hadn’t thought about that before. Matter if fact I enjoy all your story’s, adventures, and Idea’s you share with us. Thanks Mel

Can anyone help with mistreated bird problems of trust ?? I work with rescure birds in costa rica where birds are removed from their nests at an early age and sold, so the person who bought them mistreat them and we rescure….last week we found a person selling a full grown macaw in a shoe box, void of feathers !!! I have taken a few home to care for and return into loving pets but with not knowning their history its hard to know what sets them off and when…..One yellow head Amazon is a real bitter and looks at you like he would not hurt a fly and then wham…..He now scares me as he bites really hard and starts to scream in spanish,,,,A person named gregery and Laura seem to be the children from his old home and the Mother the screamer How do I get past this…hes alone all day other than talked to but you cannot trust him and he doesnt trust me or anyone….Is there hope or is it been ingrained in him to not trust again Desperate in CR