For all our international customers, click here to see our international shipping policy page for the latest updates on shipping. we appreciate all your support and wish everyone a happy 2023!
By BirdMay 02, 20145 comments

The Unique Skill Set of the Small Bird Owner 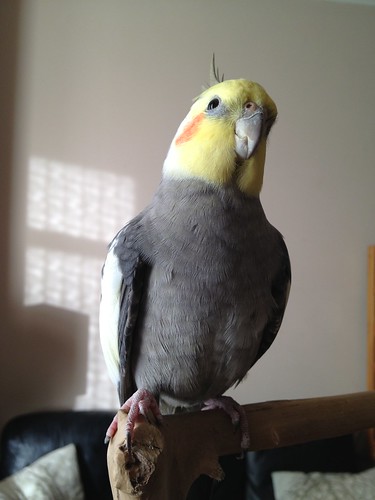 Before we talk about owners, I think it’s important to talk about their birds first: I do not believe in so-called beginner parrots, or graduating from one species to the next in order of size. This is because I believe that all parrots are made equal. The number of grams they weigh does not define them as ‘beginner,’ ‘intermediate’ or ‘advanced’ – in essence, buying a budgie will only ever teach you how to work with budgies.

My parrotlet is an aggressive, somewhat bipolar fellow with a shocking amount of power behind his bite – and yet a very sweet and gentle side. Our cockatiel, meanwhile, was always a timid parrot who knew how to defend herself, and, by the way, her bites may have been amongst the worst I ever received. Compared to our umbrella cockatoo, our cockatiel was easier to handle… but that’s because cockatoos are probably the most difficult parrot to work with.

I can’t really compare my experiences with any of them. 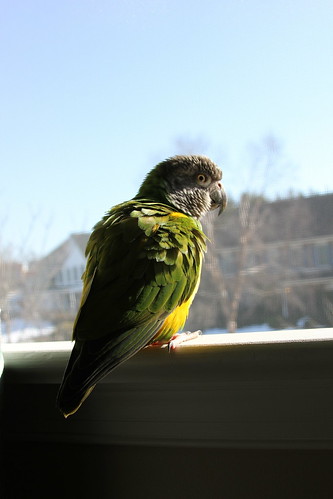 Senegal Parrot basking in the sun.

None of these birds prepared me for the next. I had to learn by getting to know them.

Let me put it a different way: We were completely out of our element in those first few weeks of getting to know our cockatoo – in spite of our research and work with different species. And the same goes for every new member we’ve brought into our house.

Working with African Greys and macaws, for instance, I have found two things: Each bird is definitely an individual, but they do tend to have specific traits common to each species.

Macaws are often bursting with playfulness. Most love to roughhouse with their beaks all over you. Greys, however, are quite regal. They’re a calm and striking species who generally want no part of your roughhousing, thank you – though they certainly aren’t opposed to play. The Grey’s flock energy is oddly serene. If you dream of owning an Amazon, though, you can’t compare life with these two species at all, because Amazons are vocal and full of vivacity – and different in every way. 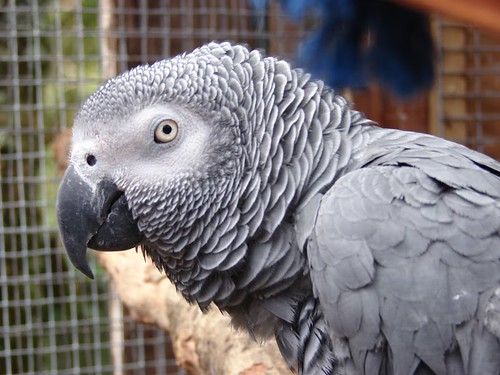 Don’t let a price tag define a bird, or the quality of his life.

A small bird has the same requirements as a large one. The difference between them is how they make their unhappiness known. A macaw bites or screams, and you know something’s up. A large bird forces you to notice.

Whether you own a macaw, a pionus, or a budgie, you run into problems and challenges in ownership – many of them are even the same, like hormones and biting. Many more of these issues are totally different, though. A macaw may have greater issues with over-bonding, or a Senegal with hormonal biting, but a female budgie may have calcium and egg-laying problems, because they are indeterminate layers who won’t necessarily stop at a set number of eggs.

It’s true that a larger parrot can be more dangerous. That’s why volunteering with a rescue, sanctuary, or friend who owns birds is critical. You’ll learn a lot this way, including whether a species actually ‘clicks’ with you. Me? I get on wonderfully with African Greys and macaws. I love the reserved, regal demeanour of Greys, and the rough-and-ready attitude of the macaws. From volunteering, I also found out that I’m not an Amazon person. They’re great birds, but they’re so rambunctious! (Not in the way that cockatoos are, because cockatoos are a force unto their own.) 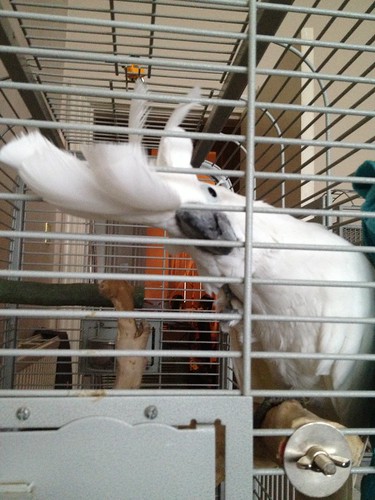 When strangers ask the big question:

After Bobo moved to the Sanctuary – due to the fact that I could only import two parrots per year – something I am sometimes asked is when I’m going to graduate to another big parrot, because that’s why I have small ones, right?

My reply? I love small birds. I have them in my life because I think they’re cute as all get-out, their tiny size makes hormones slightly more manageable (slightly), and when they bite, I don’t need stitches. I love my ‘big’ parrots, too, but I’m not in a position to keep one in toys at the moment. So yes, I will adopt one eventually – when I can fully provide for it. 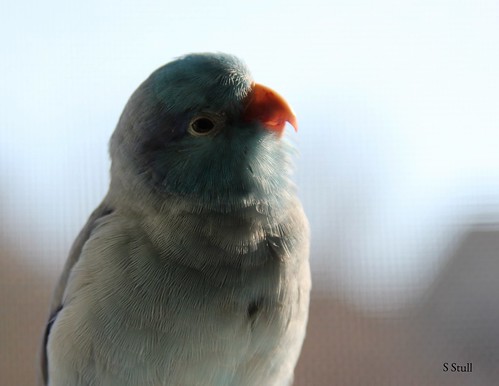 The myth of what a so-called real parrot is:

When Bobo the cockatoo first came home with me, a number of people congratulated me on my first REAL parrot. They meant well, but I was floored.

My parrotlet is a real parrot and it never occurred to me to think otherwise. He is spunky, fierce, and clever. While he may not have impressive size, he is one of the great joys of my life. But some people can’t look past that.

That kind of attitude truly hurts parrots. When we think of little birds as something to discard once we’ve learnt what we think we need to, we don’t do credit to their wonderful personalities. They still need foraging, attention, out-of-cage time, good diet, training, and love… or they suffer. My opinion is that they need just as much as a macaw, but in a different way.

I mustn’t neglect to mention that my smallest birds have possessed the largest personalities of all, filling my life with joy (and noise)! The small-bird owners I know are crazy about their flocks for the same reason. ALL parrots, no matter their size, possess amazing and unique personalities.

A parrot is defined by its hooked beak for gripping and tearing, its zygodactyl toes (two forward, two back, for holding things), and its ability to mimic.

We all handle issues unique to our birds, and sure, small bird owners don’t have to worry about hospital visits during hormonal season – but the bites still hurt, and the birds still feel. Owners of small species aren’t inferior or less experienced to other owners. We just possess a different skill set. 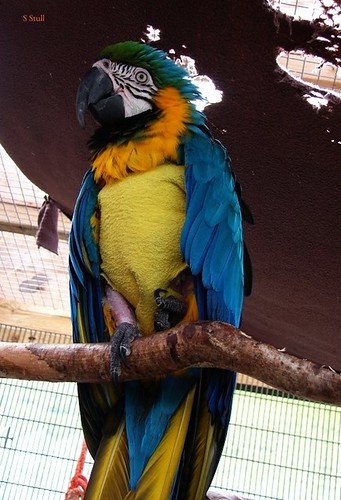 I sent an email asking about my Sun Conure. I also want to ask you about a Budgie who was found and given to us. So now my hubby and I live with a 17 year old female Sun Conure name Marbles and a Budgie who came to us on 7/20/22 when she was found sitting on our Neighbors Step. What can we do? We don’t want to give Budgie away who we now call Bella because she looks like a girl according to research. PLEASE HELP US. WE ARE STRESSING BECAUSE BELLA KEEPS FLYING TO MARBLES. DESPERATE AND CONCERNED PARENTS.

I have 6 cockatiels, and an african grey. I love them all, but I have to say, when it comes to getting cuddles and affection, I go to my tiels for that! They are so incredibly loving, and have so much personality. My grey is amazing too, but not so cuddly. He’s happy to just sit on your hand or shoulder, but not so fond of being touched. Of course, all of my feather babies are rescues, and each has their own issues with trust. It takes time to build that.

I hate when people look at my Quakers and say, you finnally got a REAL parrot! they mean well but it urks me :( I have 4 budgies and even taught them how to fly to me when called, bow, kiss, shake, and skateboard. They are very intelligent.

Ive had several different sized Amazons, 2 large macaws, and more than a dozen cockatiels. I love them all but none more than my precious loving cockatiels. Strangers seeing my birds are most impressed with the vibrant color and drama of the Macaws, as an owner, I agree neither size or cost make a bird more valuable as a companion. The large macaws are by far the most costly, in maintenance, time, travel issues, vet bills etc, more than initial output. The Amazon & tiels are very hardy until they begin to age. It totally depends on which personality appeals to you and what you can afford in terms of time, space, and costs…all are delightful companions.

I have various types of cockatoo’s .. And until I read your article, I just never thought of them as being difficult.