we currently cannot ship to Australia, new zealand, or south africa due to shipping regulations. we apologize for any inconvenience this causes.
By May 09, 20140 comments

Why Social Dominance Theory Does Not Apply To Flocks 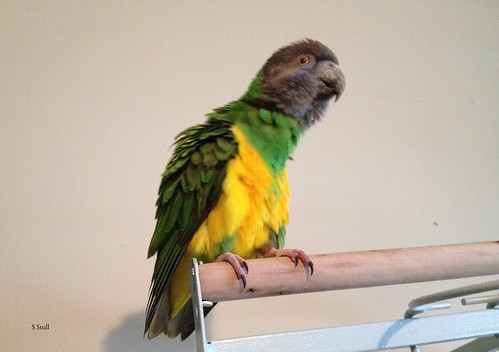 Dogs and parrots are very different creatures, but as humans, we often try to draw comparisons to their behaviour. Canines being a creature that most everyone has had experience with, a lot of owners will try to draw connections.

For instance: The theory of height dominance. The idea is that birds move up high to try and ‘one-up’ their people.

First, let’s look at a parrot’s motivation for climbing up out of reach. A bird feels safer the higher up he goes, because this is beyond the reach of many predators. A bird isn’t trying to dominate its humans. It’s making itself feel safe.

Think of it this way:  If you were a bird who naturally is a prey animal, would you want to come down from the safest place around – that place that very few predators can reach? No, you’d probably do a lot to stay there – including biting the hand that reaches for you.

Wild parrots will squabble over food, and the bird who is strongest often gets more. It’s about self-centred survival. He who eats the most probably makes the most babies and lives the longest. But the birds are focused on themselves. 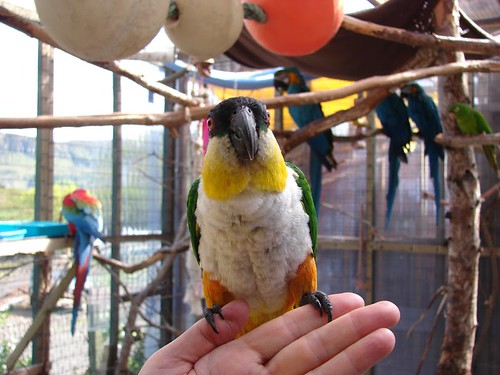 The birds in the background have moved higher because they can watch me, but I can’t reach them.

A bird is all about what he needs for himself. We’ll notice this in our own homes, too, that our pet may switch his favourite human on an apparent whim, or cuddle up to someone he normally hates when they have food, etc. He won’t hesitate to help himself to your food, or bite you if he thinks he can get you to surrender something interesting.

Flock dynamics are about who can get what, most peacefully. Wild parrots do not bite each other unless there is absolutely no other option – for instance, if the nest or a mate is threatened. Instead of attacking another bird, a bird who does not like what is happening will typically turn its back – or perhaps vocalise and posture in order to drive off the threat. If that doesn’t work, it will leave. End of conflict. Fights mean bloodshed, and bloodshed means less energy to spend on flying and foraging for food.

Because parrots in our homes can’t always just leave a situation, we do experience a lot more bites. This isn’t about dominating humans, but instead about making a point. Parrots think of themselves as equals. Competition for resources is about survival, yes, but not about ‘ruling the roost.’ 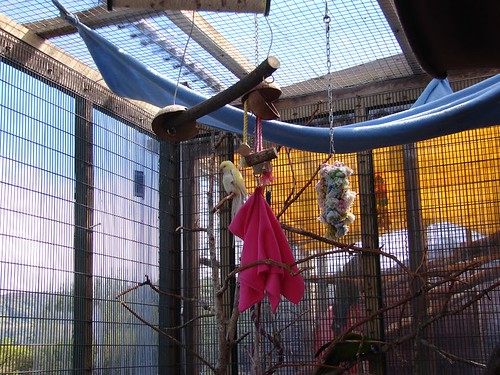 Indian Ringneck Parakeet placing himself up high, out of reach.

I think a lot of people confuse a flock sentry with a dominant or alpha parrot. When any group of birds forages, you can usually see at least one bird standing sentry above all the others, on the lookout for danger. This bird will sound the alarm if he or she spots danger. At that point, everyone either checks out the threat, or flees for safety – it can look like the sentry has driven them off.

Interestingly, it’s theorised that due to this behaviour, parrots may actually understand the concept of sharing. After all, if your guard gets hungry and weak, he can’t do his job as well.