For all our international customers, click here to see our international shipping policy page for the latest updates on shipping. we appreciate all your support and wish everyone a happy 2023!
By BirdApril 27, 20141 comment

My daughter's swollen pointer finger from the bite she endured from blue and gold macaw, Tiko.

The inevitable happened. My 11 month old daughter got bit by a parrot. Not just any parrot - and not even one of my own - a 20+ year old blue and gold macaw. For those of you familiar with Taming, Training & Tricks you know him. His name is Tiko.

It could have been MUCH worse, and I’m relieved it didn’t happen while she was with me because I would have felt just as awful as my husband did when it happened under his eye. “She’s alright, it didn’t break skin.” I comforted him. “It COULD have, it could have been much worse! She could have lost a finger! I wasn’t paying enough attention! I can’t believe I let that happen!” he retorted, completely broken. I knew he was right, but drawing attention to that wasn’t going to help him feel any better. I could imagine what he was feeling - it’s the feeling I’ve been avoiding dramatically as I carefully introduce my daughter to the birds and work on a mutual respectful relationship between them.

We did the aviary Tiko was living in last, and before starting Dave grabbed Tiko to move him out of the aviary before we began. Sydney was curiously at his feet looking up at him and I said, “Wait, let me get a photo!” then I added, “Want to hold Sydney [our daughter] in your other arm?” he picked her up, and she immediately reached as far as she could toward Tiko. Something she ALWAYS does with our birds. It’s something you just have to know is coming and always have the bird far enough away that when the bird leans in as far as it can stretch, the two don’t meet. Dave was unprepared for it, and when Tiko reached to meet her fingertip it wasn’t for a kiss.

She shrieked and cried, and comforting from us immediately ensued along with checking the damage. We were so lucky it was very minimal and she got over it very quickly (must be all that desensitizing from her clumsy German Shepherd pup at home who constantly seems to take her out to which she is no longer phased.) However, she immediately showed FEAR towards ALL birds directly after. She wanted nothing to do with Tiko, and even the ground roaming chickens were beings to be feared. This upset Dave even further as he thought he now was the cause of his daughter disliking all birds - including ours when we would return home (or so he assumed).

Dave with Sydney and the chicken (and our dog watching too)

“She knows the difference between Tiko and her birds at home.” I said, hoping this was, in fact, true. Nothing I said seemed to make Dave feel better about what he had just allowed to happen. We both knew she’d get bit at some point in her life, we all do, that’s how we learn about body language, tell tale signs, boundaries of our birds, etc, but we had hoped that would be a lot further down the line.

The only saving grace was that the bite itself didn’t do any real damage, and the emotional response she was showing could be retrained.

Video of my daughter Sydney with the chicken.

Dave made it his immediate mission to let Sydney know the chicken was nice. He let Sydney watch the chicken peck at the Earth surrounding them, and then brought it near and held it for her to touch and pet gently. She was apprehensive and we had to be patient for her to come around to be open to the idea of petting the chicken and not getting hurt. That the two aren’t always linked. She soon did and smiled up at him.

Note: Everyone parents differently, mostly because no two people were raised exactly the same and we all have different kids - making what works for some people not work the same for others. So, my blogs are by no means “parenting advice” (who takes parenting advice from someone as inexperienced with it as me, anyway?!) but more of a journal of how I handle things when it comes to my daughter and my animals. One of my “parental views” is that I don’t mind an animal hurting my daughter as long as it is not a serious injury, as long as it teaches a lesson. What I mean is, when teaching my daughter how to pet the cat gently, she later walked up to it and patted him on the face. He didn’t much like that. Once, he tolerated. Twice, he tolerated with extreme irritation and the third time in a row he swatted at her with claws and bit her on the arm. None of it was done hard, but just enough that she understood this animal could inflict pain on her if she did so to it. What that teaches (in my mind) is mutual respect. I hurt you, you hurt me. I play nice with you, you play nice with me.

I took it upon myself in this instance to do nothing. I knew the cat’s tolerance level and I knew she would surpass it ending in a little bit of hurt. As long as the cat isn’t clawing her eyes out - I saw it as something for her to learn. I didn’t say, “No! Don’t do that to the kitty!” I let her learn not to do it for herself. If I prevented her from doing it wrong - she would never know it was wrong. If anything, she would be more curious about doing it wrong in order to find out what happens.

I get that that may seem harsh to some parents - and that you may choose not to do that - and that’s totally okay. And it’s okay for me not to do the same thing you would do.

At first all Dave and I could think about was how HORRIBLE of an experience getting bit by Tiko was for Sydney. But as the days and weeks went by, we realized her interactions with our own animals (who are VERY tolerant of her) changed for the better. She had become less “grabby” (always putting her arms out at them) and more overall respectful of animals in general. She became more in tune with animal body language! I’ve seen full grown adults clueless when it comes to their own animal’s body language so to see Sydney reading it successfully and knowing when to back off an animal was astounding to me.

I wouldn’t say I’m happy she got bit - but I would say some great things came out of it and I wouldn’t take it back if I could. We’re lucky it was nothing serious - and we’re also lucky that she walked away with more than just one lesson about animals and better respect for them overall. 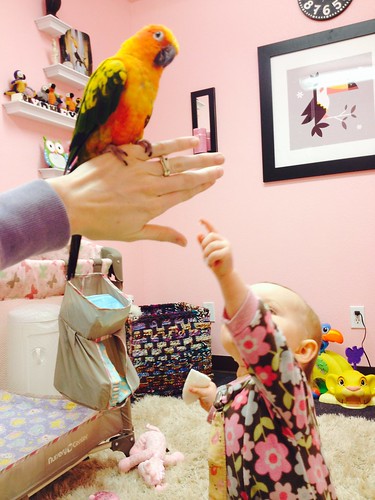 My kiddo reaching to touch the bird, like she often does.

Not to say she doesn’t still reach for them like crazy, but when close enough to touch, she will now shy away and it takes some gentle coaxing. She still enjoys their company just as much, if not more, but shakes her head and keeps her distance from their cages, travel carriers and them overall when they’re out and about as well. It’s an amazing thing for a toddler her age to be giving our animals the space they need to feel more comfortable in her presence. And I have to say, I really don’t have concern for her sticking her hands or fingers in a cage, or grabbing a macaw tail, etc. which is invaluable as a mother - one less thing to hover about. Sydney actually hangs out at a respectable distance whenever she joins me for cage cleaning time, or feeding time.

While in Boise, ID at a friend’s house she approached a large cage with two baby (11 week old) catalina macaws inside. She came up excitedly and the two macaws were immediately scared and began screaming and hissing at her - she was actually running over to me, and I was right in front of the cage looking adoringly at the baby birds. Sydney looked at the macaws in surprise, and backed up. The next time she came by the cage, she approached slowly and gave more space to the birds as she did a wider circle around it to get to me. Whenever the babies showed hissing or body language of “we’re trying to intimidate you to go away!” Sydney would oblige by giving them more space. That’s when I realized how in tune with body language she was becoming - and how much more attention she was giving to it. It makes me a lot more confident with having her around animals in general because I know the more she’s exposed to, the more she will learn. 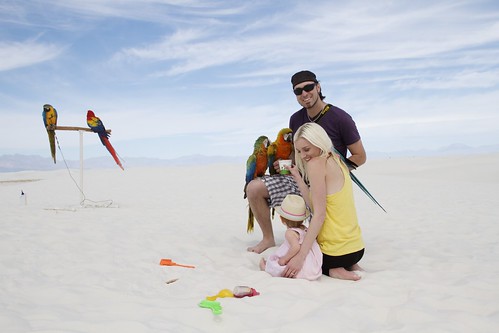 I will continue to try to provide those experiences in a positive way where no one gets hurt, but as I’ve learned - life has a way of making plans for you, and we have a way of constantly making mistakes in order to blossom more lessons. So no promises about any perfect parenting!

Hi. You are an experienced bird owner, my Indian Ringneck just nipped at my 16 month finger. Called both the vet and pediatrician waiting for call backs? Would you have any knowledge on risk of infection?